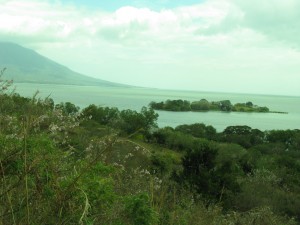 Eventually, I was indeed able to stumble my way in the dark to Hotel Venecia without having to sleep outside. The next day I decided to attempt to make my way to Volcán Maderas, the smaller of the two volcanoes. I set out from Charco Verde on foot assuming that eventually a bus would swing by the road. I walked a good 10 kilometers before I found a bus stop along side the main road on Volcán Concepción.

Transportation on the island is extremely sparse at times due to the difficulty of maintaining running vehicles in such a remote location. According to Alvaro Molina, the owner of Hacienda Merida, buses have been subject to running out of gas completely from time to time. On Sunday, there is only one that makes its way around Maderas, and it only runs at 8:30AM.

After hoping off the bus and heading towards Santo Domingo (the halfway point on the isthmus between the two islands), I read a sign that said it would be another 4 kilometers just to the halfway mark. Luckily for me, a nice caballero by the name of Dolfo gave me a ride on the back of his motorcycle which cut a lot of walking time off my journey. I still had another 10-12 kilometers before reaching my destination point in Balgüe. 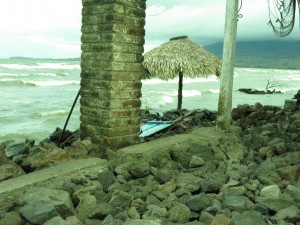 The beach at Santo Domingo is practically unrecognizable from its usual state. The water from Lake Nicaragua comes all the way up to the wall. In July of 2008, Hurricane Felix dropped a lot of rain over the Pacific coast of the country and more rains followed over the course of the year. Lake Nicaragua (or Lake Cocibolca as it used to be called) is a giant fresh water connected to the Caribbean Sea via Río San Juan and isn’t usually subjected to drastic changes in water level that I know (I don’t live there). The winds, however, were a nice change from the drier, hotter western side of the island, and it seemed a good place to stop and drink a beer before proceeding on down the road. 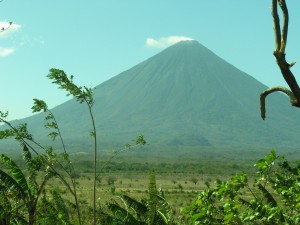 I arrived via the ferry that runs from San Jorge to Moyogalpa, the principal port town on the larger of the two islands. As I was heading over on the boat, I was looking at the map of the island trying to figure out where I would stay the night. The trip from Granada had taken quite a long while, and the ferry ride is an hour and half itself. By the time I actually was on the island, I had about an hour of daylight left.

I decided to make my way to the lagoon of Charco Verde which was supposed to be a fairly remote place. It wasn´t far from Moyogalpa, so I figured it would give me a chance to get into some real nature.

The bus dropped me off at Charco Verde, and I proceeded to head down the dusty road to where ever it lead. The sun was setting over the campos and the sound of unfamiliar birds could be heard in the trees. I walked a good half a kilometer before I ran into a man on a bike who had conveniently strapped a flashlight to his thick sweatband. He told me that the lagoon was flooded and that I’d need more than my boots to get through the water. I, in turn, asked him where the hospedaje was in which I intended on staying. He said that it was a good ways off and that I should go to Hotel Venecia which was very similar. He then showed me a short cut on a horse trail and said that I should use that to get me there before it was completely dark. The term “en recta” in Spanish means “stay straight.” Even though I knew this, I failed to stay straight which left me alone in the dark on an Island in a country where I had never been. I don’t think anything could have been more perfect at that moment.